A startup analyzes tweets, patents, and lots of other data in the hopes of identifying the next big thing.

By definition, « disruptive » technologies are those that take the world by surprise. Now a startup called Quid claims that its software can make good guesses about what the next big thing will be. It does this by analyzing a store of data on existing companies, ideas, and research.

Over the past 18 months, Quid has developed a system that charts the relationships between existing technologies, and identifies areas ripe for influential new ideas. « The goal is to map the world’s technology and to understand where it’s going, » says Sean Gourley, Quid’s chief technology officer. « The human brain can’t process all of this. » The company thinks its software can help people who invest in early-stage technologies pick more winners than losers, or guide companies into potentially lucrative areas of research.

Quid has built a data set combining information about firms that succeeded and sank, patent documents, government grants, help wanted advertisements, and even tweets. Its algorithms use that collection of information to analyze the prospects of around 35,000 firms and research groups working on new technologies.

By extracting words and phrases from the collected documents, Quid constructs a « technology genome » that describes the primary focus of each of those 35,000 entities. A map of the connections those genomes can be used by investors to find hints about interesting companies or ideas, says Gourley. Most companies cluster around established sectors, but a few will sit in the white spaces between the clusters and can represent the seeds of new technology sectors.

A map that Quid prepared for Technology Review, for example, shows a Minneapolis-based company called superDimension in the space between the clusters for medical devices and navigation technologies. The firm develops bronchoscopes that can be directed to peripheral areas of the lung using similar techniques to those used by GPS devices. Three devices placed on the patient’s chest are used as points of reference, just like GPS satellites. 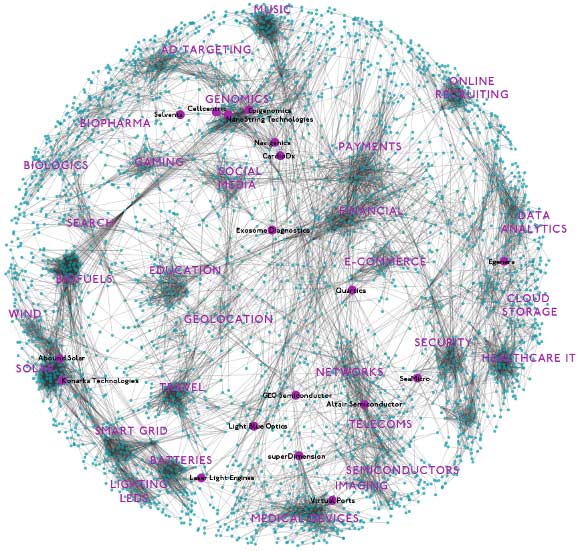 Selventa, a drug-discovery company based in Cambridge, Massachusetts, sits between clusters for ad targeting and genomics. The company analyzes reams of patient data using techniques borrowed from companies that target online ads to specific consumers.

Of course, the degree to which a company occupies white space—a measure known as « betweenness centrality »—is no guarantee of success. Quid also track trends like the amount of investment that a company is attracting, or how many patents a lab has filed. It also looks to see whether other entities are appearing in a patch of white space. If a new area is ripe for growth, other companies will soon join the original innovator. Quid hopes to eventually build a model that can indicate how confident it is in a particular forecast. « We can already make predictions, » says Gourley. « Now we’re in the process of putting error bars on those predictions. »

Ajay Royan of Clarium Capital, an investment firm in San Francisco, is trying out Quid as a way to highlight technological areas of interest. Royan says that Quid’s ability to draw connections between seemingly unrelated areas of research could make it a powerful tool. Advances in energy, for example, might rely on a development in materials science. Quid could help identify a startup or research lab that has already made that link. « They’ve made the nodes in the technology network visible, » says Royan. « That helps us understand the relationships between them. »

Royan thinks it is too early to judge if Quid will replace VCs like himself, though, and that symbiosis is more likely than direct competition. « Enhancing—not replacing—human judgment in terms of quality and throughput is the great opportunity with tools like Quid, » he says.

Gourley says that his company has around eight clients, but declined to name them. Two use Quid to guide their investment strategy ; the others use Quid’s technology maps to help decide which areas of technology to pursue.