RAPALLO, ITALY - March 24th 2012 - A group of leading game preservation projects in Europe is announcing the formation of a European federation of organizations dedicated to the preservation of digital interactive entertainment and information media.

Computer and video games have become an integral part of our cultural heritage. For more than 60 years now, they have been shaping the way we think and live together. To preserve the legacy of digital interactive entertainment and information culture, initiatives have been established all around Europe since the mid-1990’s.

Many of these initiatives are now forming a new umbrella organization under the name European Federation of Game Archives, Museums and Preservation Projects (EFGAMP). EFGAMP’s aims are to :

The formal founding of a non-profit organization and selection of hosting country will take place in the coming months. Any organization that has an interest in participating in this federation can write to contact@efgamp.eu with inquiries.

Initial supporters of the initiative : 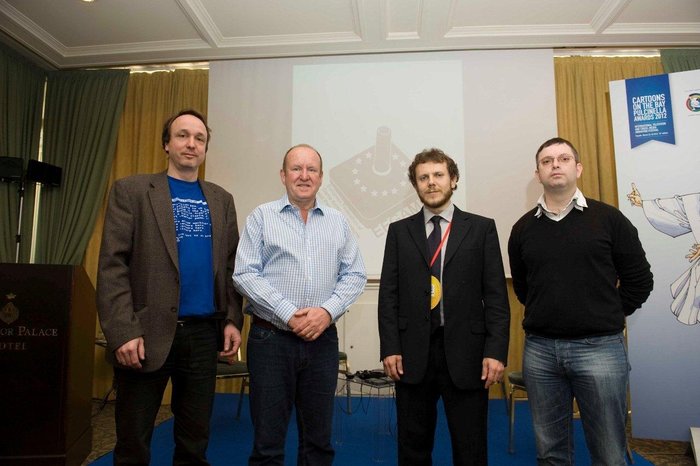 AIOMI (Rome, Italy)AIOMI, the Italian Association for Interactive Multimedia Works, Movement for Game Culture, born in 2008, has the mission to make the Italian public and institutions understand the importance of videogames as a form of art. Many events are annually organized by AIOMI in order to stretch the importance of videogames as culture, the most important of which being IVDC, Italian Videogame Developers Conference. Totally free and open to the public, since its first edition in 2008 IVDC has brought to the Italian universities the most brilliant and creative minds of the videogame industry, including Peter Molyneux, Ian Livingstone, David Cage, American McGee and many more. In 2012 AIOMI organized in Rome gamezero 5885, a free videogame exhibition focused on the birth and early development of videogames, from Tennis for Two to Super Mario Bros. Within the end of 2012, AIOMI will open ViGaMus, a videogame museum located in the center of Rome that will also serve as a study and formation center about gaming. http://aiomi.it

Association WDA (Paris, France)Established in 1996, the WDA Association is a non-profit organization dedicated to the conservation and valuation of cultural inheritance in digital technology. Its main goal is to enrich and preserve its own collection of eight hundreds machines from major companies in order to study and teach computer history. The WDA also manage various collections related to digital technologies development such as software, hardware, transmobile phones, CPU, games consoles or video games.Organized by a group of professionnals and enthusiasts, the organization has gained particular statecrafts in restoration of vintage computing hardware and created a specialized repair shop.The WDA is in charge of a free computer house clearance, a recycling solution that helps it to improve its collections and to offer second-hand equipment to individuals or public organizations. Considering its cultural and social activities, the WDA Association is recognized as acting for the benefit of the general interest.http://wda-fr.org

Bolo Museum / Mémoires Informatiques (Lausanne, Switzerland)The Mémoires Informatiques foundation’s purpose is to safeguard the history of the computer and to preserve and promote computing heritage. Collections now include several thousands of historical computers, peripherals, software, books, magazines and other artifacts linked to the evolution of computers. The foundation manages the Bolo Museum, a permanent museum located at the Swiss Institute of Technology in Lausanne (EPFL). Foundation’s partner aBCM, the friends of the Bolo Museum association, promotes the museum’s collections, restores and repairs machines. It organizes guided tours and has a great experience in organizing public events. Opened in 2002, the Bolo Museum is a member of the Swiss Museums Association.http://bolo.ch

Computerspielemuseum (Berlin, Germany) The museum opened in Berlin in 1997 the world’s first permanent exhibition devoted to digital interactive entertainment culture. Since then, it has documented the development of the medium at over 30 national and international events. Our new permanent exhibition “Computerspiele. Evolution eines Mediums” (« Computer Games. Evolution of a Medium ») opened on the 21st of January, 2011 and had 70.000 vsitors into the first year. Patron of the museum is Ralph H. Baer, inventor of home video games. The museum is a member of the International Council of Museums (ICOM) and the EU research project KEEP (2009 to 2012). In KEEP the museum is conducting research together with Europe’s top national libraries, into strategies for the archiving of digital culture artefacts. It is also partner of the project of the Australian Research Council „Play it again“ (2012 - 2014), whichs aim is to preserve the Australian game heritage. http://computerspielemuseum.de

Digital Games Research Center DIGAREC (Potsdam, Germany)DIGAREC is an interdisciplinary research network at the University of Potsdam.Approx 5 years ago it started to collect and systemically categorize digital games. DIGAREC have managed to get almost every publisher in Germany to include us in their press distribution list. Thanks to that and some bigger gifts by private individuals and some bigger institutions, DIGAREC today have more than 7.000 discs in its collection including artistic games.http://digarec.org

Espace Turing (Nice, France)What makes the force and the originality of this project are the diversities of approaches, places in Europe, digital practices and their complementarity. We hope to make the federation grow by our participation.Espace-Turing is a scientific cultural exhibition and archive space about digital sciences, mathematics and computers history. It was created in October 2010 by the Laboratory of Mathematics of the University of Nice. Since its creation, it has welcomed nearly 6000 people. It takes part in the local and national demonstrations. Since more than 50 years, computers and simulations not only contributed to the development of science, but they also supported the quality and the multiplicity of the interactions between disciplines. A part of our work concerns the relations between sciences and video games.http://espace-turing.fr

Game Preservation Society (Tokyo, Japan)The Game Preservation Society (Gēmu Hozon Kyōkai in Japanese) is a non profit organization (NPO) recognized by the Japanese authorities. Based in TōKyō and led by a French man (Joseph REDON), this organization is actively preserving classic video games made in Japan in the 70’s/ 80’s/90’s era. Main activities are collecting games and games related items (gathered 60000 so far), building an unified database that include all platforms (arcade, personal computer and consumer games), backuping media and making digital remaster (including tapes, floppies and other paper works). Priority is given to materials that were never released outside Japan.http://gamepres.org/

KryoFlux (United Kingdom)KryoFlux was founded in 2010 by members of SPS as a privately held company to sell and distribute SPS technology developed over the last decade. Its key products are KryoFlux - High Resolution Flux Sampler for USB and CTA, the Softpres Analyser for long term storage of data ingested from floppy media, regardless of copy protection. It will inspect data ingested and verify integrity and authenticity of assets acquired. http://kryoflux.com

MO5.COM (Paris, France)With over 100 public events since 2002 dedicated to digital culture and one of the largest collection in Europe with 50.000 estimated items, MO5.COM and its 400 members is the most active French non-profit association which aims at preserving digital culture and history. Our final goal is to create with the national institutions the first national museum in France dedicated to the digital patrimony and its initiators.Recently, our most famous and largest videogames history exhibit ’Game Story’, supported by the French ministry of culture, has been internationally acclaimed like an achievement into presenting to the public the videogames history, and will certainly travel around the world.http://mo5.com

National Media Museum/ National Video Game Archive (Bradford, UK)The National Videogame Archive (NVA) is a joint UK project between the National Media Museum and Nottingham Trent University, which aims to celebrate the culture and history of videogames for researchers, developers, game fans and the public.Announced in September 2008, the Archive is working to preserve, analyse and display the products of the global videogame industry by placing games in their historical, social, political and cultural contexts. At the heart of the National Videogame Archive is the determination to document the full life of games, from prototypes and early sketches, through box-art, advertising and media coverage, to mods, fanart and community activities.http://NationalMediaMuseum.org.uk

Silicium (Toulouse, France)Created in 1995, silicium is the oldest organization devoted to retrocomputing & retrogaming. Its constant effort to promote this culture has been rewarded by more than 500 donors over the years. Today, it has over 100 members worldwide who pursue the same goal in many ways. Silicium is the home of a huge collection of computers and videogames, along with a library of more than a thousand books where experts and researchers have access.Silicium is offering a dynamic website and forum, many exhibitions, editing books, games and many other projects. With a vision for nearly twenty years, Silicium is working on it’s main goal, to build a permanent exhibition to set the foundation with yesterday’s heritage for tomorrow‘s cultural revolution.http://silicium.org

Software Preservation Society (United Kingdom)About The Software Preservation Society : SPS, or Softpres, formerly the Classic Amiga Preservation Society (CAPS), is a privately funded association of art collectors and computer enthusiasts striving for the preservation of computer art, namely computer games. Unlike games from the 1970s (delivered on solid state ROM-modules) and games from and after the mid-1990s (delivered on optical media like CD-ROMs and DVDs which are supposed to last for decades), computer games from the 1980s and early 1990s were delivered on magnetic media like tapes or floppy disks and are now on the brink of extinction. Founded by computer expert and preservation pioneer István Fábián in 2001, SPS already has digitally archived about 4.000 games produced for the Commodore C64, Amiga, Atari ST, IBM PC, CPC and Spectrum to name just a few platforms. SPS is working closely with other associations like museums and libraries around the globe to preserve the early years of gaming history. The technology and tools developed by SPS are unparalleled when it comes to forensic inspection of floppy disks. http://softpres.org

SUBOTRON (Vienna, Austria)SUBOTRON is a shop and meeting point for the discourse on digital game culture at the MuseumsQuarter Vienna since 2004 and organzies lectures, workshops, social meetings, exhibitions and concerts. All hard- and software of the collection can be played and purchased. In a series of lectures on the theory of digital games established in 2005, international and local experts discuss topics from the fields of science, economy and art to enhance the critical debate on recent social developments. Since 2011, SUBOTRON organizes a weekly series of events on the professional practice to encourage the creative entrepreneurial knowledge regarding education and career opportunities, local companies, and internal networking. The series pursues the objective of linking business, science, and the community, promoting their development and public perception, and consequently supporting the establishment of the Austrian gaming scene. At the moment, SUBOTRON transforms into a “Center for digital game culture”, where the existing collection of the history of digital games will be extended to a museal context, a library will be founded and the knowledge transfer / media literacy of our society will be expanded.http://subotron.com