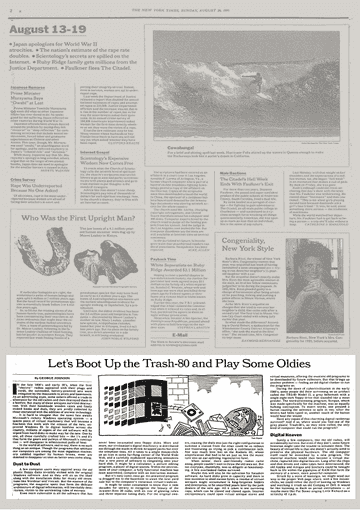 IN the late 1920’s and early 30’s, when the first « electric » radios appeared with their plugs and cords, the outmoded, battery-powered sets were relegated by the thousands to attics and basements. As an advertising stunt, some sellers offered a trade-in allowance for the old radios and then destroyed them in a bonfire. But many of these antiques survived destruction. With their handmade wooden cases and finely etched knobs and dials, they are avidly collected by those entranced with the oddities of ancient technology

It is hard to imagine that the same fate awaits Microsoft’s rickety Windows operating system — a quaint piece of virtual machinery that will become a has-been this week with the release of the new, improved Windows 95. In digital bonfires across the country, millions of copies of the old software will be wiped from hard disks to make way for the new. One by one, all those carefully crafted bits — the 1’s and 0’s that form the gears and pulleys of Microsoft’s contraption — will disappear in infinitesimal puffs of heat.

In the world of software, sad to say, there is no such thing as an antique. Though the programs that animate our computers are among the most ingenious machinery cobbled together by human brains, most are doomed to disappear as soon as better ones come along.

A few computer users may squirrel away the old plastic floppy disks invisibly etched with the original Windows software. And so they will sit on the shelf along with the installation disks for musty old inventions like Wordstar and Visicalc. But the essence of the programs, the magnetic spots that form the delicate architecture of digital information, will inevitably deteriorate, victim to the unrelenting tides of entropy.

Even more vulnerable is all the software that has never been incarnated onto floppy disks. More and more, our civilization’s digital machinery is distributed not through the mails in shrink-wrapped packs but over the telephone lines. All it takes is a single mouse-click on an icon in some far-flung corner of the World Wide Web, and a carefully modulated squawking announces that a new piece of software is congealing onto your hard disk. It might be a calculator, a picture editing program, a player of digital sounds. Within the environment of your computer, a fully functional machine has been assembled, complete with an instruction manual.

But it’s easy come, easy go. An unwanted program is dragged not to the basement to await the next yard sale but to the computer’s voracious virtual trashcan.

It might be some consolation to know that it took decades for society to recognize the beauty of the Atwater-Kent 20 radio, with its row of glowing tubes and three separate tuning dials. For the original owners, coaxing the dials into just the right configuration to summon a station from the ether could be as tedious and frustrating as trying to pick a combination lock. Nor was much love lost on the Radiola III, whose amplification dial had to be set just so, lest the music turn into an ear-splitting regenerative howl.

When newer, more user-friendly radios came along, people couldn’t wait to throw the old ones out. But not everyone, thankfully, was so diligent at housekeeping. A few overlooked radios survived.

Maybe this will also be the salvation for forsaken software. As hard disks grow in capacity and there is less incentive to shed excess bytes, a residue of virtual antiques might accumulate in long-forgotten folders and directories, to be unearthed years later by the junk dealers of the new age. All it takes is one surviving copy, which can be cloned and cloned again. Internet entrepreneurs could open virtual antique stores and virtual museums, offering the mustiest old programs to be downloaded by future collectors. But that brings up another problem — finding an old digital clunker to run the programs on.

During the dawn of cybercivilization in the early 1980’s, some people did their scrivening on an artifact called the TRS-80 Model II, a gray behemoth with a single eight-inch floppy drive that sounded like a meat grinder. The word-processing program, Scripsit, which was made specifically for the machine, was an equally hulking contraption. To insert words, one pressed a button causing the sentence to split in two. After the letters had been typed in, another touch of the button would heal the wound.

Have any copies of this charming digital rattletrap survived ? And if so, where would you find one of the gray plastic Trash-80’s, as they were called, the only kind of computer that could run the program ?

Surely a few computers, like the old radios, will accidentally survive. But even if they don’t, some future historian might take the trouble to simulate them. The beauty of virtual life is that one doesn’t actually need to preserve the physical hardware. The old computer itself could be mimicked by a new program. The material machine would then become a virtual machine, raptured into digital heaven. Long after the chips and disk drives and video tubes have deteriorated, the old Apples and Amigas and Sinclairs could be brought back to life within the gigabytes of RAM that form the memory of a newer, more powerful computer.

Struck by a wave of nostalgia, we might wind our way to the proper Web page where, with a few mouse-clicks, we could relive the thrill of booting up Windows and watching it crash an old Compaq or Dell. It would be like listening to Bach on period instruments — or maybe more like Pat Boone singing Little Richard on a scratchy 45 r.p.m